The Workers - An Experiment in Reality: The East 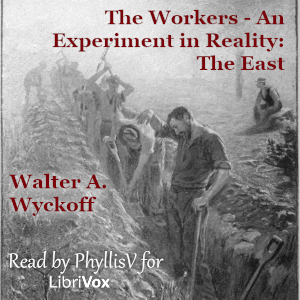 The Workers - An Experiment in Reality: The East

by
Walter A. Wyckoff

LibriVox recording of The Workers - An Experiment in Reality: The East by Walter A. Wyckoff.
Read by PhyllisV
A young scholar, recently graduated from Princeton College, travels across the United States as a member of the working class, taking any job he could find, enduring hardships and struggling to make a living. He travelled mainly on foot, designing for himself a social experiment on experiencing different class and culture structures and the reality of working conditions at the end of the 19th century. This volume covers the Eastern part of the United States. - Summary by Phyllis Vincelli
For further information, including links to online text, reader information, RSS feeds, CD cover or other formats (if available), please go to the LibriVox catalog page for this recording.

Reviewer: dahszil - favoritefavoritefavoritefavorite - March 18, 2021
Subject: PhyllisV, thank you very much for doing a superb job reading
PhylliaV reads at a human pace, clearly and has a very good voice. The Chartists or the workers movement was just "getting its legs" in the late 19th century . Workers in the Britain didn't have it much better at the time of the author's "experiment" as a worker. British Prime Minister Gladstone of the then UK parliament promoted and gained some advances for the proletariat . However much of that was rolled back during the Edwardian era of the early 20th century Wyckoff's was a Princeton graduate and professor at Princeton when he decided on going into the working class to write this book .

In 1900 around one third of american children worked in dangerous factories and other work instead of going to school, and suffered grinding poverty.

It wasn't until the FDR NEW DEAL era( starting circa 1934) after the great market crash(1929 and the great depression started that true reforms were put into law for workers . In Great Britain Lord Beveridge's report and the Welfare State were instituted similar to FDR's in the UK in 1940 . After ww2 it was probably the first time in US history where someone from the working class could climb to the middle class with government grants and loans.

The 1950's to the late 1970s there were limits to profits and a better standard of living for the middle and working class, and social security payments for those who became disabled and the elderly . One thing where the US lagged behind other developed countries and the UK was a National Health Service, which it doesn't have till this day .

It was the Thatcher/Reagan rollbacks reactionary revolution which has made life tenuous for the working and middle class, more hours for less pay adjusted for inflation in the late 20th century till this day . Every government has continued the Reagan reactionary rollbacks in public protections, goods and services (that also includes so called liberal democrats Clinton and Obama) . In the UK working class work was being destroyed brazenly by Margaret Thatcher . Tony Blair brought back some public protections, vital public goods and services. but also started in a subtle and secret manner privatization. When the The Tory and Lib Dem coalition became the government in 2010 privatization of the NHS has been instituted in circuitous and convoluted manner . The necessary US public welfare programs barely exist anymore . The UK analog to welfare programs the Tories have turned into what is called Universal Credit .It is an endless , exhausting , endless hoops to jump through and hurdles to jump over many have to decide between heating and eating and there has been an increase in sleeping rough or homelessness..

The US and UK must get back to what most developed and even developing countries have and that is a a mixed economy: part private sector and part social sector .

But for the past year we and the rest of the world is going through the coronavirus pandemic . We can no longer bail out the fat cats . We must make our priority a social economic system . The free market must have limits. The super wealthy and corporations must be forced by law to pay significantly higher wages and taxes . When most become immune to the covid virus then we can think of building a mixed economy . We must never go back to the unfettered so called free market . If so the people will never stand for bailing out the "banksters", corporations and the billionaires yet again . Full blown civil unrest will break out, followed by the biggest market crash ever. And as it always, is sooner or later after a market crash and depression there is full blown world war. We must not become "1984" nor a post nuclear war smoking ember then followed by a planet engulfed in post nuclear winter. Some rare human zombies dying slowly and cockroaches shall rule the planet